We will not rest until we achieve the fullest possible accounting of all missing American military service members from all wars.

The numbers of unaccounted-for personnel are staggering, currently 83,000, and the length of time since they have been lost is extensive, going back to World War II. Many will never be recovered because the loss occurred over deep water, were due to catastrophic explosions, or eyewitnesses to the incidents have long since passed, but every new identification helps bring closure to one more American family, and is one step closer to achieving the fullest possible accounting of our missing. It is also a re-commitment to those serving in uniform today that America will bring you home.

We encourage the U.S. government to continue its POW/MIA accounting efforts, and we are directly engaged with other nations and their veterans’ groups to urge their cooperation and assistance to obtain information about missing Americans. VFW national officers make annual trips to Pacific, Asian and European countries where they always meet with senior host-country officials to stress the importance of conducting investigation and recovery operations, as well as gaining access to documents and archival research facilities.

The VFW is the only veterans organization to return to Southeast Asia every year since 1991, to Russia since 2004, and now into China for nearly a decade. The VFW opens doors on a vet-to-vet level that makes us the envy of U.S. government politicians and bureaucrats who must follow a strict protocol. 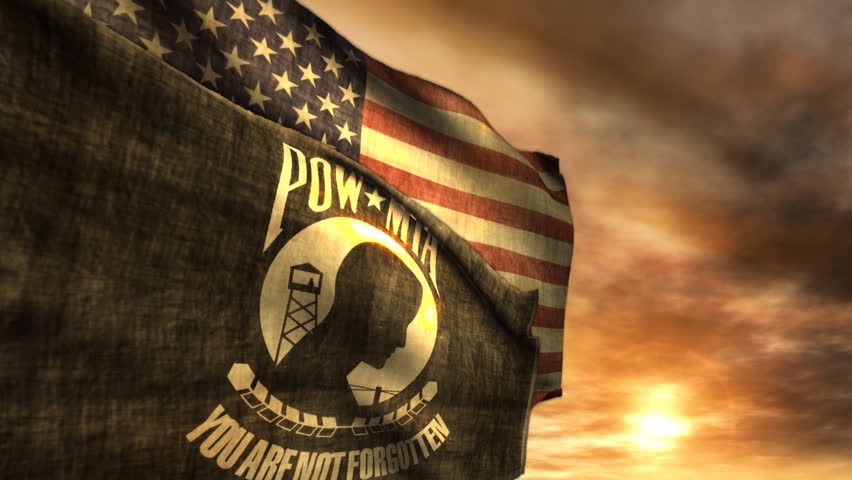 District 2 dedicated  their new POW/MIA Chair Of Honor Monument on POW/MIA Recognition Day 2019 at Albert G. Horton Veterans Memorial Cemetery in Suffolk, Va. The 5 Missing Man Table Ceremony was conducted in the Commital Area and the unveiling of the monument in the Garden Of Fame

What Do People Do?

Many Americans across the United States pause to remember the sacrifices and service of those who were prisoners of war (POW), as well as those who are missing in action (MIA), and their families. All military installations fly the National League of Families’ POW/MIA flag, which symbolizes the nation’s remembrance of those who were imprisoned while serving in conflicts and those who remain missing.

Veteran rallies take place in many states, such as Wisconsin, in the United States on National POW/MIA Recognition Day. United States flags and POW/MIA flags are flown on this day and joint prayers are made for POWs and those missing in action. National POW/MIA Recognition Day posters are also displayed at college or university campuses and public buildings to promote the day. Remembrance ceremonies and other events to observe the day are also held in places such as the Pentagon, war memorials and museums.

There is 1,741 American personnel listed by the Defense Department's POW/MIA Office as missing and unaccounted for from the Vietnam War, as of April 2009. The number of United States personnel accounted for since the end of the Vietnam War in 1975 is 841. About 90 percent of the 1,741 people still missing were lost in Vietnam or areas of Laos and Cambodia under Vietnam's wartime control, according to the National League of Families website (cited in the United States Army website).

The National League of Families’ POW/MIA flag symbolizes the United States’ resolve to never forget POWs or those who served their country in conflicts and are still missing. Newt Heisley designed the flag. The flag’s design features a silhouette of a young man, which is based on Mr. Heisley’s son, who was medically discharged from the military. As Mr. Heisley looked at his returning son’s gaunt features, he imagined what life was for those behind barbed wire fences on foreign shores. He then sketched the profile of his son as the new flag's design was created in his mind.

The flag features a white disk bearing in black silhouette a man’s bust, a watch tower with a guard on patrol, and a strand of barbed wire. White letters "POW” and "MIA”, with a white five-pointed star in between, are typed above the disk. Below the disk is a black and white wreath above the motto "You Are Not Forgotten” written in white, capital letters.

The POW/MIA Flag flies below the American Flag or on adjacent pole,  on all Federal Buildings 24/7.

AS OF July 15, 2020 THE NUMBER OF AMERICANS MISSING AND UNACCOUNTED-FOR

DONATE TO THE VFW

Our programs support our service members while they are on the front line, as they are being discharged and long after they return. Your tax-deductible donation will be immediately directed to the VFW programs where your support is most urgently needed.

Join us as brothers and sisters of America to preserve the rights of veterans and support each other as only those who share in the camaraderie forged by conflict can.

Keep up-to-date on how the VFW is working to improve the quality of life for veterans, service members & their families and the community.